“Then the Self abides in its own true nature”

It reminds me of an old joke:

An engineer, a physicist, and a mathematician were on a train heading north, and had just crossed the border into Scotland.

The engineer looked out of the window and said “Look! Scottish sheep are black!”

The physicist said, “No, no. Some Scottish sheep are black.”

The yogi is like the mathematician in a way: rather than making the assumptions of the engineer, or even the physicist, letting the reality be obscured by assumptions, distractions and fantasy–memories and dreams and how we wish the world to be–we try to let go of all of that to observe things as they most truly are. This is at once mundane and profound.

The relationship of this to the asana practice seems to me straightforward–we put ourselves in a position where it is hard to become mired in the unreal, by working the body in a way that demands as much of our attention as we can muster. With no capacity to spare for anything but this present moment, we start to train ourselves to have that sort of focus, and eventually we can start to bring it off the mat. 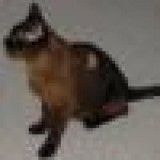